How to defeat terror: stop it being terror and start it being just another annoyance.

Ie: laugh at it whenever possible.

This doesn’t just work for Islamist terrorists, by the way. It also works for the home grown kind and the less well known Cornish variety…

TLW‘s mum has a wall in her house which is oft referred to as The Ego Wall. On it is at least one certificate or presentation photo of an achievement for each member of the family. TLW’s degree certificate is there, for example, as well as various bits of paper with the word ‘exemplary’ on it.

And now, the youngest in the family has something that may well be acceptable to go on said wall. Although we may just start our own Wall d’Ego.

Yes, I know it’s just a certificate of attendance, but Roxy is a dog. She is unlikely to ever get into Mensa or to save a life, this may well be the only certificate she ever gets…

It might be well known that I’m a fan of flight. I still find the prospect of a trip on a plane to be exciting, and I generally try to get a window seat to see how we’re getting on.

Such was the case this past weekend, and as we came into land at Shatwick I happened to see a massive number of flashing lights near the runway. Which was a cause for a little bit of concern, especially when a bit more looking found more emergency vehicles leaving the fire station and racing towards the runway.

Frankly, brown trousers at this point might not have been inappropriate.

You can imagine my relief when said vehicles darted past the runway and into a field, wherein was to be found a fake plane and what was clearly an exercise. Which was interesting to see in an of itself, but still, I’d rather have heard about it in advance…

Poor Neil Lennon. What with the letter bombs, people turning up at training with pistols, and people taking flying leaps at him, it can’t be much fun being him just now. 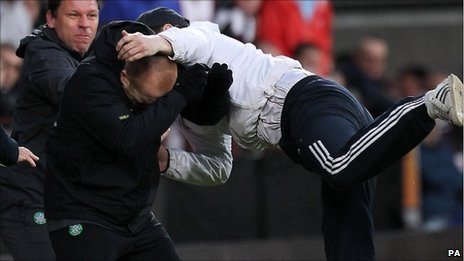 I wonder what it is that makes him such a target?

Not too long ago, the presence of the urban fox round these parts was only a little problem. They caused some noise, yes, but it was outside and could be ignored by those of us with two legs.

Now, however, there is a four-legs in the house. And the recent increase in foxy-screaming (or barking, howling, whatever it is they do) has sent our poor four-legs a bit potty. Barking is only entertaining when it’s outside and not during the hours of darkness – not when it’s inside at 0030 when you’re due to get up at six.

So, does anyone know of a hunt local to South East London that would be keen on bagging a few little foxies? I’ll meet their reasonable expenses if it means I get to have a good nights sleep and the little buggers stop shitting on my lawn…

I have the catering ability of someone who can’t cook; I’m fine with this fact and I realise that it’s never going to change. But I do appreciate those who can, which is why I’ve been glued to MasterChef this series. Personally, I wanted yer man Tom to win, because I think his restaurant would be one I’d go to again and again, while Tim’s would be one that I’d visit just the once. But that’s not the point.

The point is that the food from Tom & Tim was just amazing. Sara, less so, but that’s just because I can’t get my head round having chocolate in my starter or jam in my main course. The rest was just drool inspiring, which clearly didn’t pass Greg Wallace. The man’s eyes and facial expressions were among the funniest things I’ve seen on telly this year, and the sheer hunger on his face was a delight to behold.

TLW agreed, and summed it up quite sufficiently upon Wallace eye-fucking Tim’s desserts. Said she, simply: “You fat fuck, Wallace”.

That said, I want his job. Badly.

Thanks, Sony. Now I have to go and change one of my passwords. And given that I usually forget what one I changed, that means that I need to change all of my passwords soon.

You know me, always willing to smack Apple for being an entirely creepy monolith of a company. And now it’s facilitated jealous husbands and wives keeping tabs on their owners by leaving a log of all their movements on the family computer.

Not that anyone who uses an Apple product would ever give cause for jealousy, of course. What with them being voluntarily tied to one company for the rest of their existence…

I’ve not yet seen any of the Game of Thrones TV show, but the news that HBO has commissioned another series can only mean good things.

Whether it will be shot in Norn Iron to the same extent isn’t something that’s public yet, but from what I remember of the books there should be chunks shot there. Which is also nice. Four days at work this week? For everyone? I’ll take that…

Obviously, I’d rather that it was a three day week. But I’m fairly sure that one of them will be along presently.

(Also: isn’t it nice when some bastard hacker breaks into your site and starts putting unwelcome links into places? Took me four hours to get everything back up and running, and half the passwords in my life have now changed. The rest will change soon, as soon as I can be sure that the feckers aren’t still messing about on my server and harvesting whatever information I put in…)

Now that he’s in opposition, and someone else has diverted a tiny amount of combat power from Afghanistan, he’s all up in arms that it’s being neglected. Which is a bit rich, really… Oh to be in opposition, where nobody needs to know that you’d have done exactly the same as the shower of bastards currently in power…

Last evening, myself, TLW and One Other went to see a little play called In a Forest Dark and Deep. Very good it was, intense, well acted, and entertaining the whole way through. If you happen to have a spare moment and the time to get a ticket, I’d recommend it.

However, maybe not on a school night. Am knackered. Oh well.

There’s a major problem with having so much of your job oriented towards the end of a financial year – you spend so much time and effort getting everything done for your deadline that you get the famous “Friday Feeling” when you’ve done it.

So if the year end falls on anything but a Friday, you get crushed the next morning when you have to wake up for more work. I think that must be the origin of April Fool’s Day, you know…

When your entire workplace is geared towards everything being done and dusted by 31st March, and large parts of your job role come together on said date, is it a tad irresponsible to take the preceding Monday off?

Don’t care. Three day weekends are too much fun. Those of you in Norn Iron, with your day off and your random pissups and your really tacky carnival and your absence of politicians.

Those of us who don’t get St Paddy’s off will not be at all jealous. Not at all.

How I spent my mornings between washing and leaving for work in the days PR: eating a decent breakfast of poached eggs or porridge or the like, sitting at the PC, reading stuff from t’internet, posting angry nonsense on this blog.

How I spend my mornings these days:

These days it’s a bit more effort and the blog suffers a little. But it is quite a lot of fun anyway.