In my poorly remembered career as a student, some of the most fun to be had in the vicinity was at a Methodist Central Hall. In Birmingham. 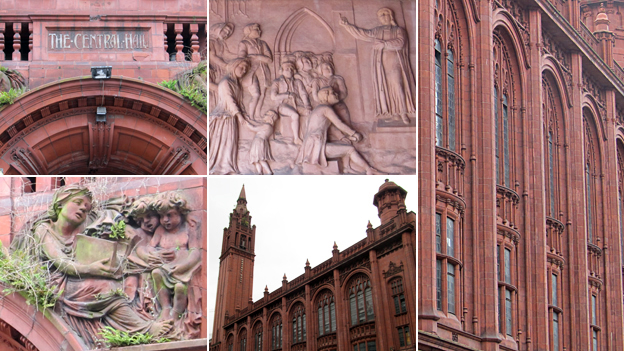 Of course, most people wouldn’t associate (a) Methodist Central Hall or (b) Birmingham with wild fun for student ages, but the fun was there. For reasons alluded to by Auntie Beeb.

Methodist central halls were grand buildings that used to attract thousands of people when the temperance movement was at its strongest. But over the years many have been sold off, with some now used as bars and nightclubs.
…
The central hall in Birmingham is opposite the magistrates’ court. Built in 1903, it has huge, intricately designed windows and its spire towers above many of the other buildings in the area. It’s a Grade II-listed building.

But it stands completely empty.

There’s a sign for the Q-Club nightclub still on the front, but that was closed in December last year. There’s a palpable whiff of urine in the doorway and faded graffiti underneath a sculpture of John Wesley preaching to his followers.

I find it terribly sad to think of the Que standing empty; no more Atomic Jam, no more Flashback, no more introducing sheltered young NIrelanders to proper all-nighters that end with the watching sun rising through stain-glass windows and silhouetting totally trashed people in silly clothes. No more being charged £1 for a 5p ice-pop and thinking it a bargain.

‘course, I’ve mellowed a bit myself and no longer think that lying on your back on the floor of a chillout room (listening to a friend chatting to the Snoopy picture) as the highlight of a term, but back then and back there it was much awesomeness. And it’s now gone, to be turned into flats.